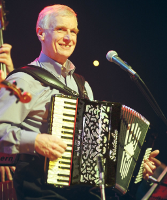 John Carmichael is one of the best known and popular band leader/entertainers in Scotland today with many recordings to his credit.

Former Scottish Accordion champion John has produced, presented and played on Television, Radio and in theatres all over the world.

He was the Accordion and Fiddle Association of Scotland's guest of honour in 2004 and he was inducted into the Scottish Traditional Music Hall of Fame in 2008.

John is a regular tutor at Feisan in Skye, Ullapool, Inverness , Stirling etc, where children and adults join in his 'Accordian is fun' classes.

John is delighted to be a member of the tutor team at the GFW ... a place where you can realise that dream of playing a few tradional tunes.