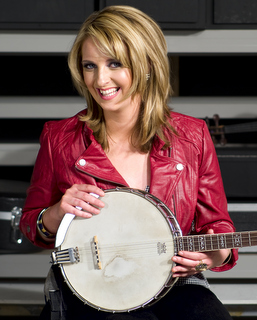 Celine, a graduate of the Royal Scottish Academy of Music and Drama has toured and recorded extensively from the age of sixteen, performing fiddle, tenor banjo and vocals with the Scottish band Calasaig. In 2001 REL/R2 Records released her solo album Something Else.

Celine was a recipient of the Auleen Therault Young Tradition Award at Goderich Celtic Roots Festival, Canada and performed at the Robert Burns Memorial Lecture given by Kofi Annan at UN HQ, New York. Since then Celine has continued to tour and record with some of Scotland's finest musicians including Brian MacNeill, John Carmichael, Mick West, Annie Grace, Stevie Lawerence & Fiona Cuthill.

As a tutor, Celine has had the pleasure of working with an number of organisations including Royal Conservatoire of Scotland, Celtic Connections, Platform, Givin' it Laldie and of course, GFW. Celine has taught tenor banjo and fiddle at GFW for over 5 years and really enjoys the opportunity to teach two of the coolest instruments in the world!